Issues after upgrading OS version in the Mac environment

The following issues have been confirmed following an OS upgrade being carried out in the Mac environment on March 12, 2018. We will provide updates on this website as soon as we have made progress on these issues.

Unable to start applications saved to the home directory

The Mac environment allows you to save and use software, such as free software, in an individual environment by copying a directory with an “.app” extension of the software onto the home directory. It has been reported that software with the “.app” extension downloaded in the user’s home directory become inaccessible following an OS upgrade.
The Mac OS upgrade introduces a new system which checks the first use of an executable file by an administrator with authority. On investigating this issue, it was discovered the problem was caused because user files on the file server cannot be accessed with administrator authority in Mac OS. Therefore, applications without the necessary checks are prevented from being launched, causing this problem.

We are currently looking at solutions for this issue. As a possible circumvention, it is possible to enable individual access to executable files.
For example, if saving mi.app in the home directory, execute the following terminal command:

After executing the above command, you would be able to use the software downloaded in the user’s home directory.
Please make sure that the file path is correct before trying this fix, as the path for executable file varies depending on the application. Please note that there is a chance that files which you do not desire to be made public may be made accessible if you allow access from unrelated directories.

When users start Safari for the first time, the top page of the ECCS website (https://www.ecc.u-tokyo.ac.jp/) was set to display as the homepage (startup page) in the previous system. However, this setting has become disabled. Each user needs to individually set a homepage from [Preference] -> [General] after starting Safari.

When some new users (as many as 1 in 10) try to enter text in Safari, both Safari and the Mac OS freeze, requiring a hard manual shutdown as a result. We have already publicized the freeze issue when using UTAS on the website, as we have received many reports from users. However, we have learnt that this freeze issue happens to people using programs other than UTAS. Please use Google Chrome or Firefox instead of Safari until the necessary measures have been taken. Even though Google Chrome is not a recommended web browser for ITC-LMS, there are not many cases where using Google Chrome has caused problems. If you wish to be cautious, please use Firefox when using ITC-LMS.

Unable to start the “Mail” application

Unable to input Japanese, or input is slow after logging in

When you use the previously named Kotoeri (circled in red), issues were found where you cannot input in Japanese, or the inputting is slow.
This issue will take time to solve, as it is necessary to contact Apple Inc. 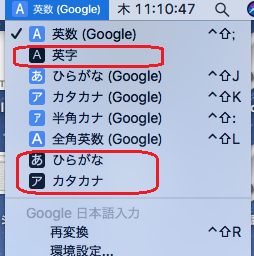 We would like to ask users to use the Google Japanese Input instead of Kotoeri when inputting Japanese until the problem is solved.

Free software will not start on the SSH server [solved]

Graphs cannot be displayed in gnuplot on Mac environments